When it comes to your first ICO investment, it can feel pretty overwhelming. In this year alone, hundreds of ICOs have been funded for more than $3.2B. There’s no sign of the ICO market stopping anytime soon.

But if you’re new to cryptocurrency then figuring out exactly how to invest in ICOs without losing your coins is harder than it looks. Maybe you’ve heard that ICOs are where the real money is at. It’s true that you can make massive gains from a successful ICO, but you can also lose everything on a bad bet. So as with any risky investment—don’t put in anything you can’t afford to lose.

In this guide, you'll learn everything you need to know to confidently invest in your very first ICO.

Before you can invest in an ICO you have to choose from the hundreds of initial coin offerings launched each month. If this is your first ICO it’s easy to feel intimidated by all the technical details, or worse persuaded by pretty websites and shiny press endorsements. Remember:

However, you do have to do your research. Some ICOs are well-thought out scams trying to steal your investment money. But with a little common sense and some digging, it’s fairly easy to spot the scams and find solid investments. Here’s what I recommend you research before investing in any ICOs:

Every ICO has a whitepaper. Typically the whitepaper is a pdf of 20-40 pages that lays out everything you need to know about the new coin. This should include what problems the coin solves, the technical details of its development and what the team’s plans are post-funding. All whitepapers are laid out a little differently, but a lot of heartache can be avoided by using some old-fashioned common sense to determine whether or not you think this is a good investment.

The whitepaper often has multiple audiences, so don’t be surprised if there are technical sections that are difficult to understand. That’s totally normal. On the other hand, some whitepapers are full of fluff and should immediately raise a red flag. Once you’ve read through the whitepaper you’ll have a better sense of the company’s industry, competitors, founding team, and development roadmap.

Stalk the Founding Team on LinkedIn

The best structures start with a solid foundation and cryptocurrencies are no different. Before you can confidently back the right coin it helps to know who you’re getting in bed with. For an ICO to truly be successful long-term, there has to be a dedicated team behind it.

Before I back any ICO, I like to review the professional experience of each of its team members. I’ll  ask a few key questions:

In just a few minutes you can paint a pretty detailed picture of who you’re dealing with and what experience they have. This type of research can also help you avoid founders and teams that aren’t in it for the long haul.

Another key piece of information that will help inform your investment is the roadmap. By now you’ve probably come across the roadmap in the company’s whitepaper. The roadmap is exactly what it sounds like, a timeline of when the company will accomplish meaningful milestones.

These milestones vary depending on the goal of the company but should give you a general idea of what will be completed leading up to, during, and post ICO. Just because a company has a good idea it doesn’t mean you should invest in them. Personally, I’m skeptical of companies that start an ICO without a working prototype.

The final piece of information I try and find in the roadmap or whitepaper is when the new coin will be listed on an exchange. Regardless of how good the idea or company is, the payoff comes when you can finally exchange the new coin for a profit.

Lately, I’ve seen several websites list which exchanges will offer their currency as soon as the ICO ends. This isn’t a must-have before investing but it proves that the company behind the coin has their ducks in a row and has already worked that out with the exchanges. Since adoption and demand play a huge role in the price of the coin post-ICO, the greater the trade volume of the exchange the better.

For better or worse, speculation fuels all kinds of markets. Whether that's speculation of a blizzard causing a run on milk and bread at the supermarket or speculation on stock prices the week before quarterly earnings announcements.

As an investor, it's okay to make investments based on speculation. For example, every time Bitcoin has a hard fork, anyone holding BTC receives an equal amount of the new currency. And every single time that has happened the new currency has been worth several hundred dollars. So based on this speculation, I might buy up lots of Bitcoin when I hear news of an impending fork.

Speculation can be very useful when trying to time the markets. Hype, on the other hand, is rarely helpful and usually involves deception. Hype is when a celebrity endorses an ICO simply because they get paid to. And with a few easy to use tools we can quickly discern between the two. 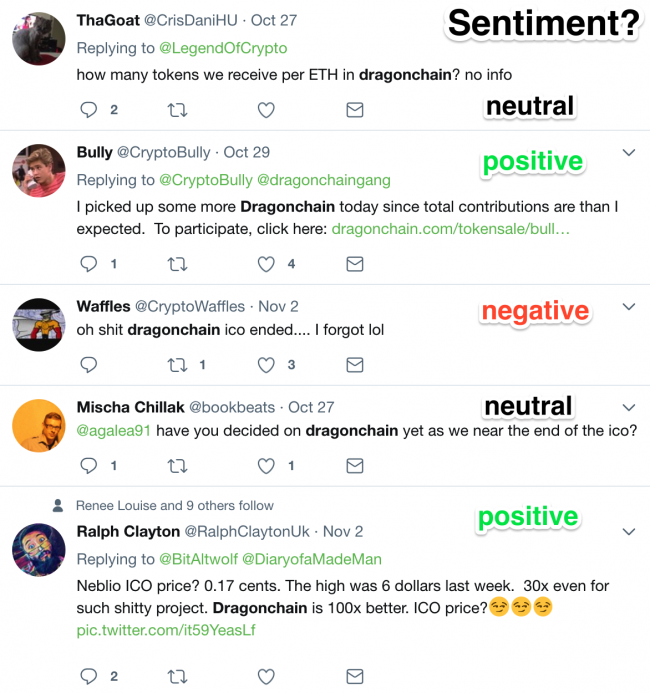 Part 2 - The Anatomy of an ICO (Infographic) 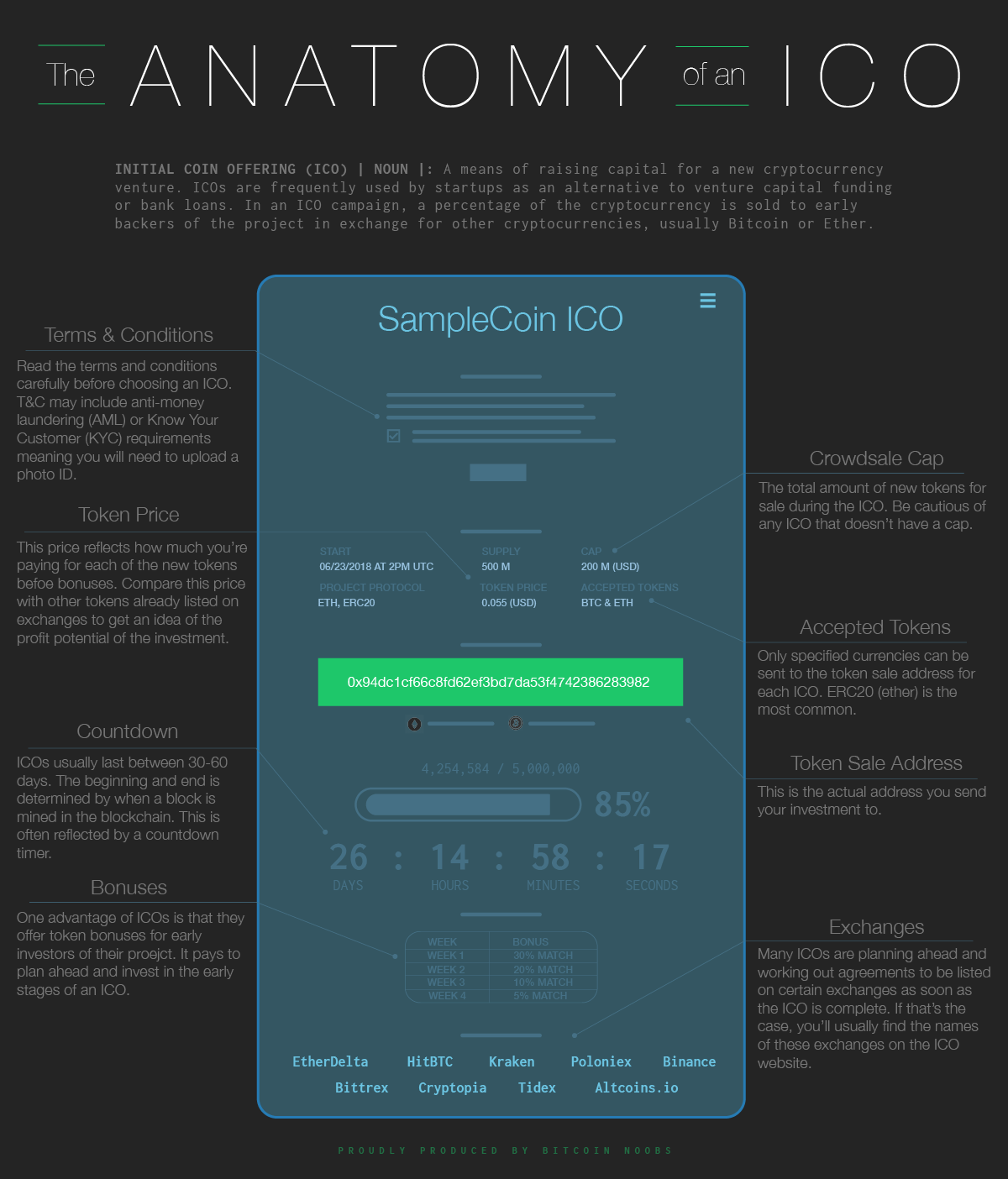 What is an ICO or Initial Coin Offering?

An ICO is a means of raising capital for a new cryptocurrency venture. ICOs are frequently used by startups as an alternative to venture capital funding or bank loans. In an ICO campaign, a percentage of the cryptocurrency is sold to early backers of the project in exchange for other cryptocurrencies, usually Bitcoin or Ether.

The Anatomy of an ICO

Terms & Conditions - Read the terms and conditions carefully before choosing an ICO. T&C may include anti-money laundering (AML) or Know Your Customer (KYC) requirements meaning you will need to upload a photo ID.

Token Price - This price reflects how much you’re paying for each of the new tokens befoe bonuses. Compare this price with other tokens already listed on exchanges to get an idea of the profit potential of the investment.

Countdown - ICOs usually last between 30-60 days. The beginning and end is determined by when a block is mined in the blockchain. This is often reflected by a countdown timer.

Bonuses - One advantage of ICOs is that they offer token bonuses for early investors of their proejct. It pays to plan ahead and invest in the early stages of an ICO.

Crowdsale Cap - The total amount of new tokens for sale during the ICO. Be cautious of any ICO that doesn’t have a cap.

Accepted Tokens - Only specified currencies can be sent to the token sale address for each ICO. ERC20 (ether) is the most common.

Token Sale Address - This is the actual address you send your investment to.

Exchanges - Many ICOs are planning ahead and working out agreements to be listed on certain exchanges as soon as the ICO is complete. If that’s the case, you’ll usually find the names of these exchanges on the ICO website.

The majority of ICOs require deposits in bitcoin or ether, also commonly referred to as ERC20. If you need help acquiring either cryptocurrency, check out our guide on How to Buy Bitcoin for the Very First Time. Since the majority of ICOs accept Ethereum, the rest of this guide will outline how to contribute to ERC20 ICOs.

Just like investing in the stock market, an ICO investment has certain rules and requirements for investors. Which can include:

Pro Tip: Check the ICO website before you purchase any cryptocurrency to make sure you're buying the right coins.

Once you've purchased the appropriate currency at an exchange, you'll need to transfer it to a wallet before you can deposit it in an ICO. For an Ethereum ICO (ERC20), I'd recommend creating a wallet with MyEtherWallet.

Once you've created your new wallet and you'll need to send funds to your new account address which can be found under View Wallet Info in the navigation.

After you've sent the ether and you see the total amount appear under account balance you're finally ready to contribute to the ICO.

First, you'll need to locate the deposit address for the ICO. The deposit address is typically found on the ICO contribution website. Sometimes the actual address is hidden, so it might take a little digging to find, but it should look very similar to your MyEtherWallet account address (a long string of numbers and letters).

Once you've located the address copy it and head back over to MyEtherWallet. Click on Send Ether & Tokens in the navigation and you should see a screen like this:

Short Answer: It's a small fee paid to miners in order to include your transaction in the blockchain. The higher fee you pay the more quickly it will be included and the less you'll wait for it to be confirmed.

Now that the transaction has been sent you wait for it to be approved and included in the blockchain.

MyEtherWallet automatically has a warning that during ICOs this process can take up to 3 hours. In my recent experience, it took about 30 minutes to be approved. If you're anything like me, you'll want to navigate to the Check TX Status page and incessantly refresh the page until this: 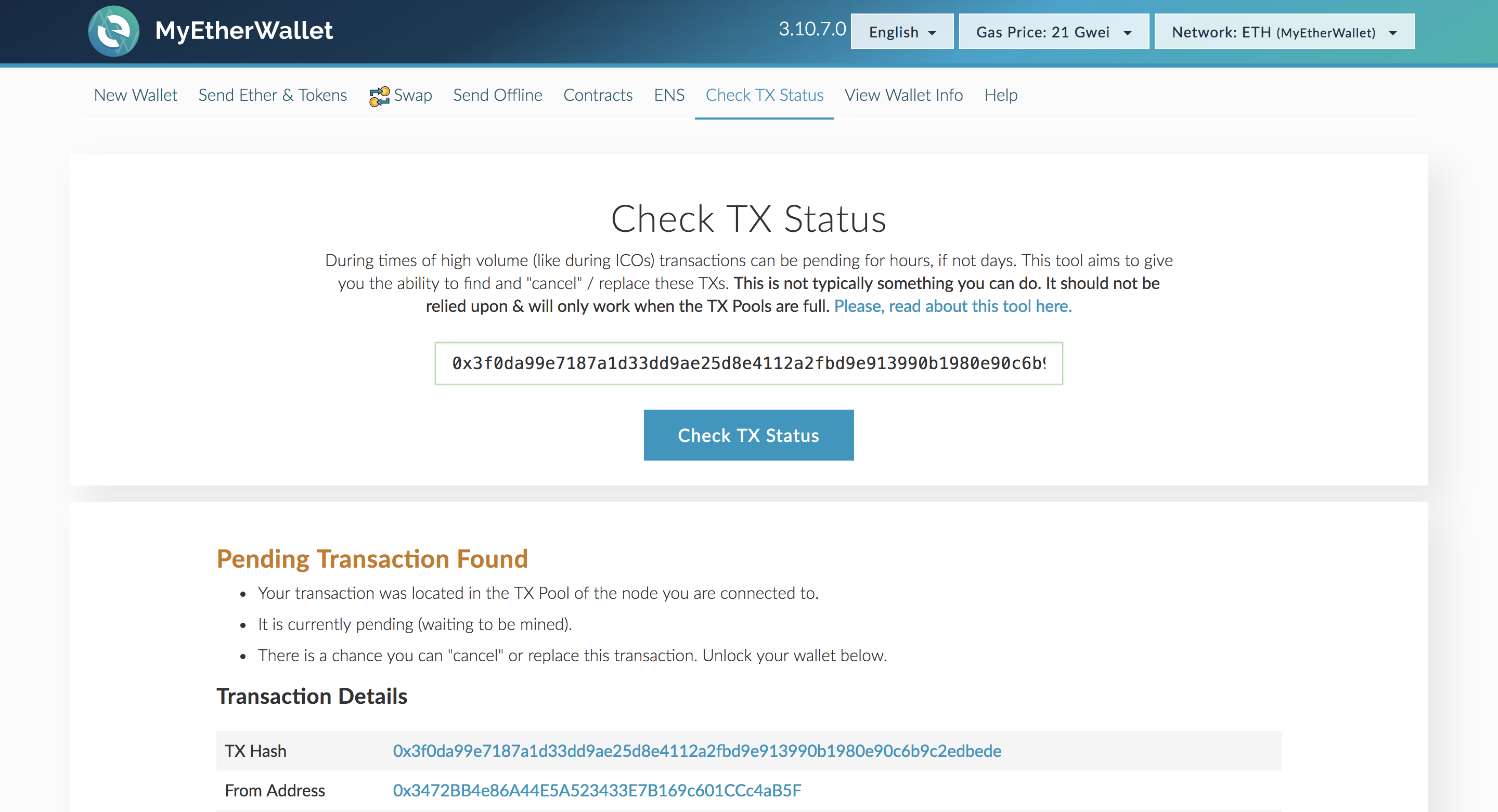 Now that the transaction has been approved and included in the blockchain you can scroll down and on the page and check for any errors. If you've followed these instructions then you shouldn't have any issues.

But what about all those shiny new coins you just purchased? Where did they go? When do you actually get to see them?

Each ICO is a little bit different sometimes you'll have to wait until the end of the investment period to see your coins but more often than not you can see the tokens immediately in your wallet.

Step 5 - How to add custom tokens to MyEtherWallet

Now that the transaction has been completed, it's time to add your shiny new tokens to MyEtherWallet. 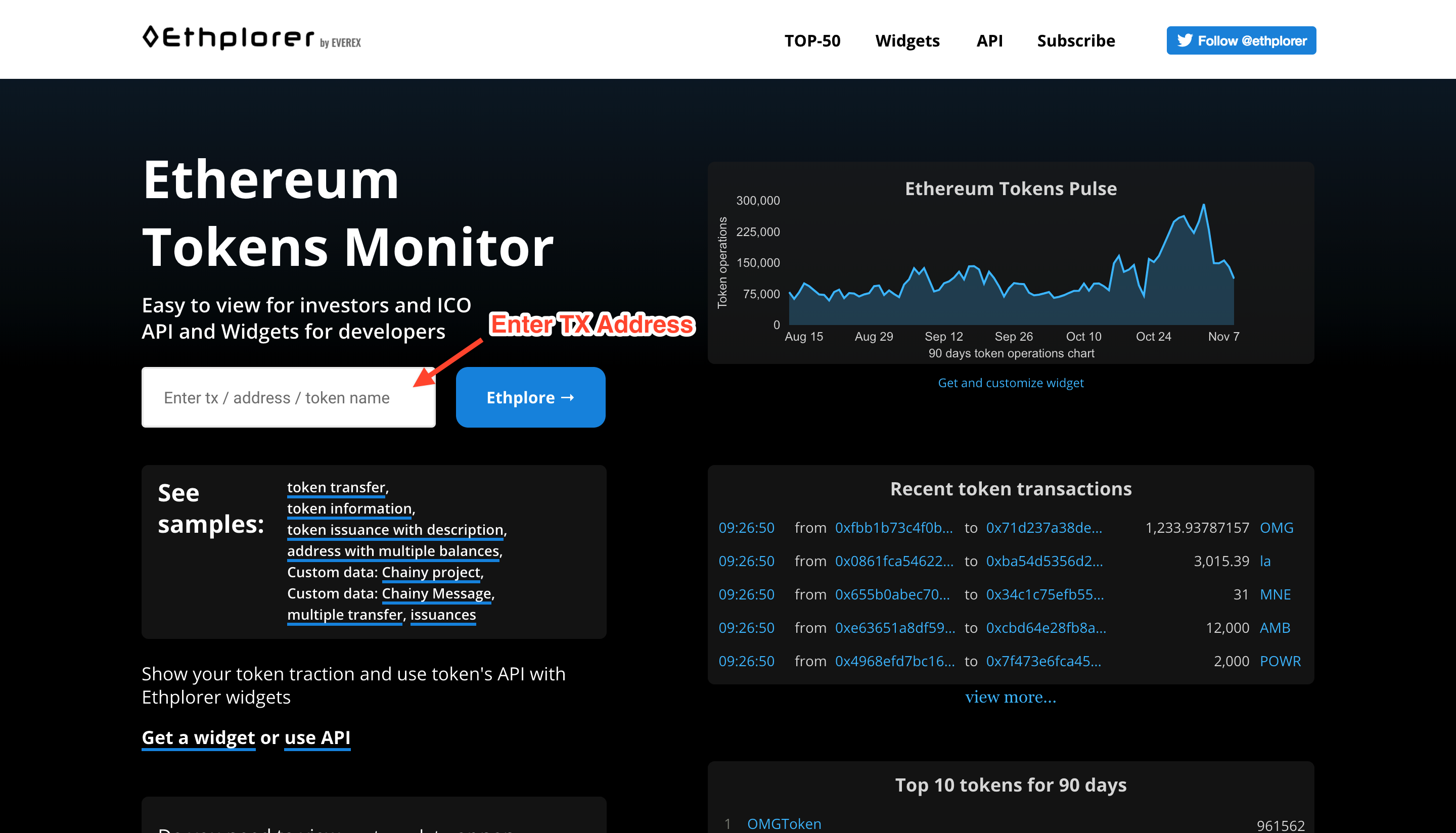 Now you should be able to see the details of your transaction: 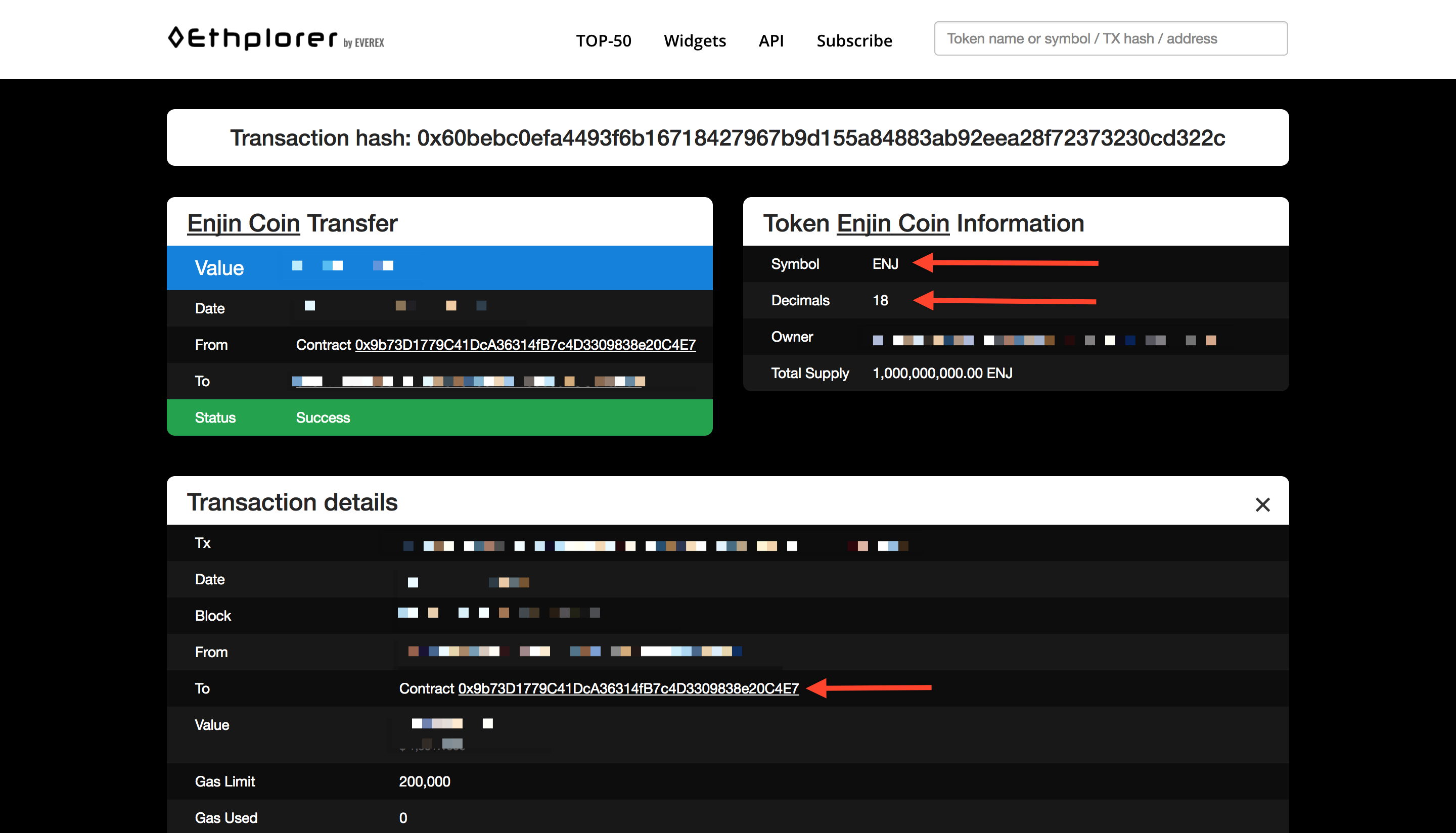 In order to add the token to MyEtherWallet you'll need three pieces of information from this screen:

Once you've saved this information, you should now have your new tokens stored securly in MyEtherWallet. Congratulations on participating in your first ICO!

If you get stuck or have any questions on any of these steps, please feel free to reach out to me on Twitter or leave a comment at the end of this post.

Also, these instruction cater specifically to an ERC-20 or Ethereum (Ether) based ICO. If the initial coin offering is not accepting Ethereum, then you would obviously need to purchase whatever currency they are accepting and use a wallet service other than MyEtherWallet.